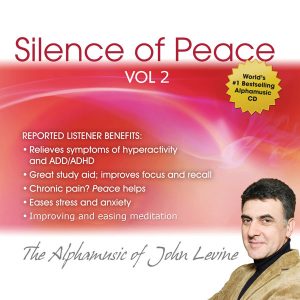 Recommended for stress, hyperactivity. Silence of Peace vol1 has been a hugely popular title, and because of this John has released a new version of the bestselling CD – Silence of Peace Vol2. Cambridge University research found that Silence of Peace vol1 significantly reduces hyperactivity, impulsiveness and classroom chatter, with an overall improvement in academic performance. Ideal for people who love vol1, but want the new variation, while still receiving the same powerful benefits.

Download/mp3 version - 60 minutes
MP3 downloads cannot be refunded or replaced once purchased. Your download will be automatically sent to the email provided. Link is active 2 days and has limited access.
£19.99

Thank you for your support

I played my first copy of Silence of Peace until it wore out! I also used it for general relaxation in less severe cases. All my patients seemed very settled when I played them John’s Alphamusic. Some of them even took it to play it in their homes in their personal time. I remember he came only twice to my clinic and it was enough. I worked with him using relaxation method and I played him John Levine’s Silence of Peace CD to relax him. It was an amazing experience for him. He felt that his absent limbs were being massaged, that he could connect properly with them, and then he felt his pain evaporate. He experienced his first moments pain–free whilst listening to John’s Alphamusic. He was over the moon. The time came for his next appointment and he told me that his pain had stabilized at a reduced level of 50%. After our last session, again using John’s Alphamusic, he called and told me that he felt able to move on, that his life had changed and that he felt like a new person.
Malgorzata Chodak, therapist working with cancer and diabetes patients

I started using the CD in September when I was revising for my exams. It helped to calm me and to concentrate after only a few minutes. Silence of Peace really filters out the distracting noises as I live on a very busy street in South West London she explains. I could easily lead myself into alpha state. I was very pleased with the results! It worked really well for me. I got 81% in one exam and 74% in the second which is a grade B pass. I am always very nervous about exams; the Silence of Peace and Reiki really helped me up with the revision and nerves. In order to enjoy what you are studying you need to be calm and not feel overwhelmed by the amount of work you have to take in. We don’t know what our mind is capable of; it is capable of so much more than we believe. I think Silence of Peace helps us to tap into all of that potential that we have. I would advise people to listen to this CD from the beginning of their studies to get them into the practice of focusing and studying. I would especially recommend it for degree level students, because the concentration level needs to be very high.
Sadhana Palmar

My friend has noticed that when she puts Silence of Peace CD on, the cats would come to speakers and lie in front of them totally chilled out. In fact few weeks after she started playing the music, the cats had another check up and their blood sugar level after months of being totally unstable, has now stabilized and the dozen of the insulin was much more to what their vet has expected it to be. It had a greater impact on her cats’ life as well as on her! I truly recommend this music!
Dr Steven Aronson, therapist